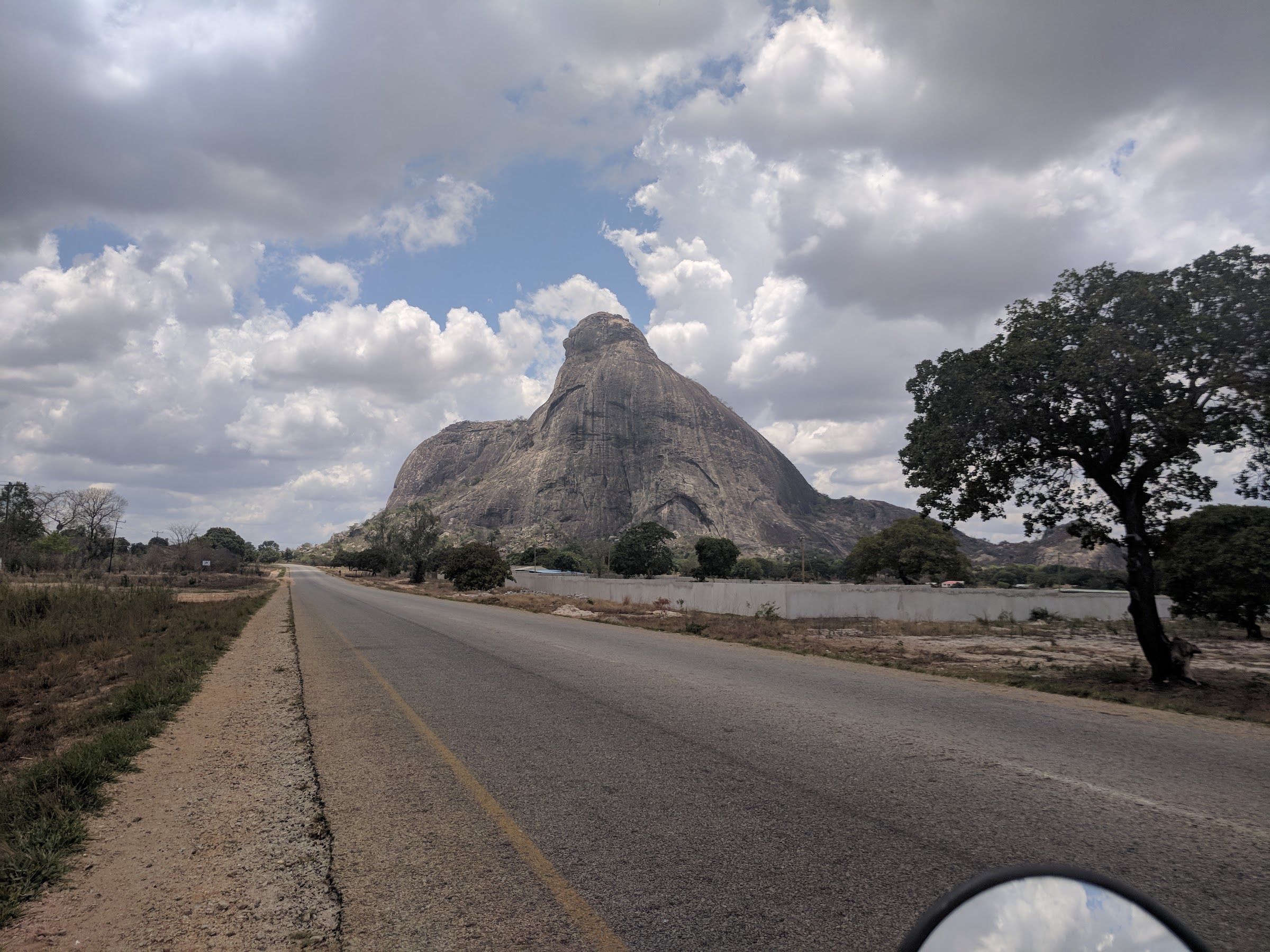 By daylight, the scenery around Nampula was strange and stunning. Giant hunks of granite like misshapen body parts were scattered seemingly randomly around the otherwise unimpressive landscape. The road was in decent shape, and made graceful arcs around the monoliths. The flat landscape made for broad vistas dotted with endless pockets of granite.

We were headed almost due east. As we continued, scraggly trees and dusty vegetation interspersed with the giant rocks gave way to lusher jungle and a handful of lumpy hills the road labored over and around. It was another hot and humid sunny day, with big friendly clouds looming in the sky. We stopped off for lunch in Namialo, and immediately attracted a huge throng of gawkers, who’d occasionally scatter when one of the many micro/full-sized buses passed through to hawk various packaged and local snacks on platters and sticks through the windows.

We passed through a few more small towns before the road gracefully descended into pastoral flatlands filled with cultivated land showing rich soil. Eventually, around fields of bananas, the telltale cerulean blue of the ocean peaked through. The road curved and bent along the coast for a spell as the landscape became more and more dotted with civilization before ending in the town of Lumbo and a gate leading to a 3km one-lane bridge to the small Island of Mozambique!

A brief primer: The Island of Mozambique (hereafter: “the Island”) is a small and narrow natural island, approximately 3km long, but only at most 500 meters wide. The Island had been a major Arab trading port for ages before Vasco da Gama plodded through in 1498, and the sultan who controlled it then ended up lending the country its name (Ali Musa Mbiki). The Portuguese came back in the 16th century and took control, building what is considered the oldest European buildings still standing in the southern hemisphere (primarily a church called Chapel of Nossa Senhora de Baluarte, which is essentially a converted mosque). They also built a huge fort and a settlement they dubbed the capital of Portuguese East Africa. From there, and for hundreds of years, it was a major trading port for slaves, spices, and gold. Much uncomfortable evidence of their old slave trade remains. In 1898 the capital was moved to present-day Maputo (due to waning trade from the opening of the Suez Canal), and by the 1970’s, a larger port to the north grabbed the remaining trade. It’s now a UNESCO world heritage site occupied by about 14,000 folks. 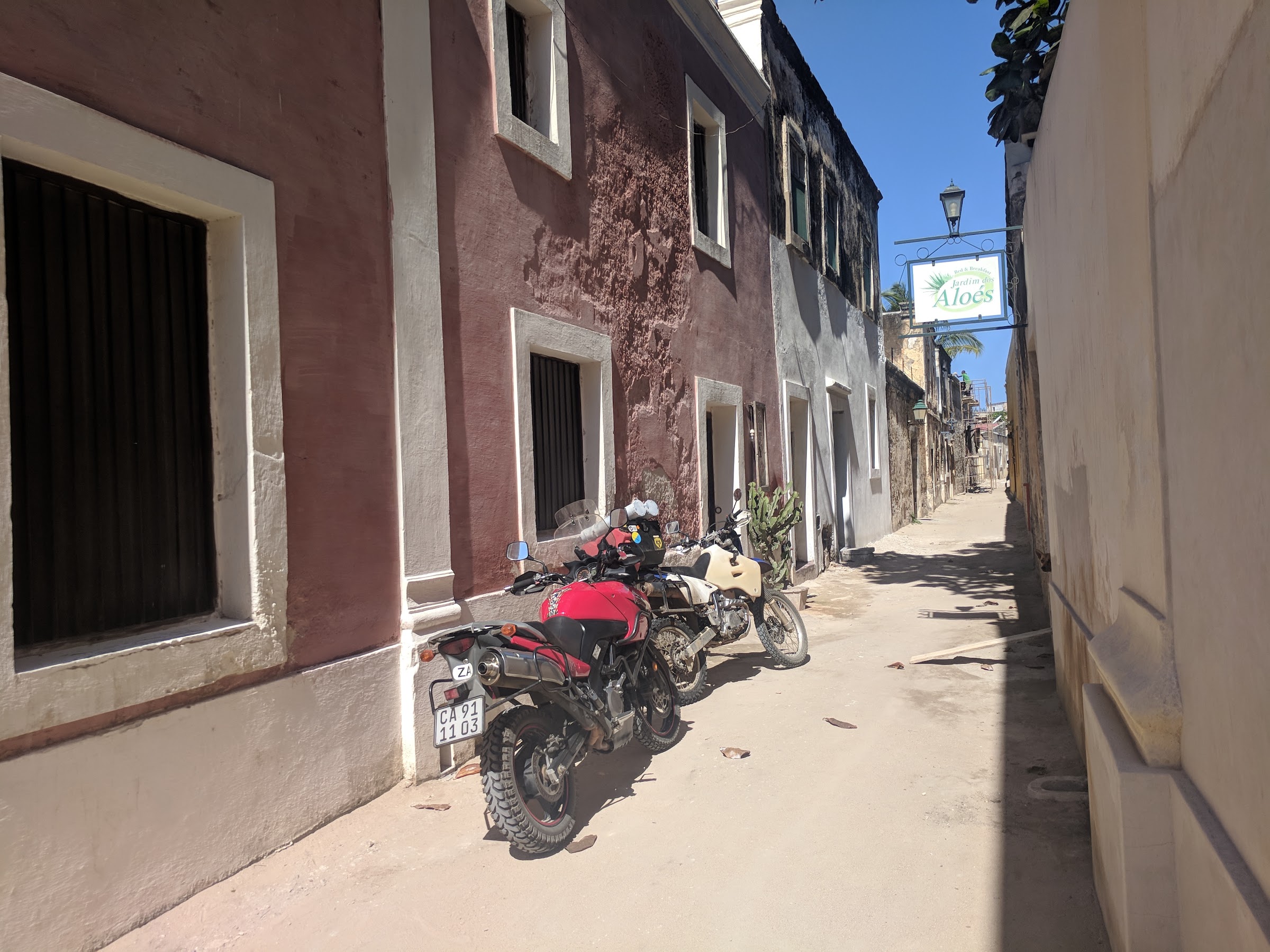 The Island is also absolutely gorgeous, packed with narrow winding alleys, large ancient decaying buildings with collapsed roofs and walls still being inhabited, and even the occasional Art Deco monster from the final chapters of the island’s prominence. Near the main drag and off on a narrow dirt road we found our hostel — the analogue of the Ruby Backpacker’s we’d stayed in in Nampula. It was a beautiful old building that had been largely restored to decent condition, with a large roof deck with newborn puppies stashed in the corner, a small kitchen and courtyard, and our beds stuffed into a small attic only reachable by rickety wooden ladders. A Honda XR250 with a South African license plate stood in the courtyard which the owner informed us belonged to a woman traveling solo. Once checked in, we hit the beach and took a ride around the island. The water was the familiar bathtub embrace of the Indian Ocean. END_OF_DOCUMENT_TOKEN_TO_BE_REPLACED