The next day ended up a bigger adventure than expected. From the first kilometers outside of Muxungue, the roads took a dramatic turn for the worse, dipping even further into insanity after passing the turnoff for the large coastal port of Beira at the town of Inchope. The roads were more potholes than pavement. Where possible, small dirt tracks off the shoulder of the road were more passable than the road itself, with some potholes big enough to fit the entire motorcycle in them.

Corey and I bumped and swerved through the morning and afternoon, trying our best to find paths to weave around slow cars and huge semi trucks attempting to navigate the seemingly-war torn landscape, often swinging all over the roads in an attempt to do so, and dramatically increasing the latent danger of passage. As if to accent the danger, as we approached the area around the Gorongoza National Park, the military presence stepped up significantly. To make sure we didn’t miss that, we were stopped and forced to delete photos we attempted to take while crossing a bridge over an expansive rocky river valley surrounding the Pungwe river due to “security” concerns.

The Gorongoza area was and continues in many ways to be a hotbed of unrest in Mozambique. Once home to the command center of the Mozambique Resistance Movement, it was subjected to an outsized amount of violence. The park was shuttered for nearly 10 years, and decades of sporadic uprisings continued long after the ceasefire in 1992. Burned out hulks of buses litter the road along Gorongoza, supposedly targeted by the rebels to maximize casualties and rusting in roadside reminders of the area’s history. Undeterred, we carried on, but the road made the goings ludicrously slow, deliberate, and sweaty in the beating sun.

As we reached the end of the park, which lies to the east of the road, we came to a dirt road turnoff that would allow us to both cut down on some of the “paved” road, and also to pass near the jovially-named “Casa Banana.” We took it and continued on a sandy and hilly path through the jungle. Sliding through tire-busting sand, the shade of the closed-in forest canopy and lack of potholes made it a lot more pleasant. At a fork in the road on the edge of the park, a full-on military encampment with barricades came into view. Armed soldiers asked us a few simple questions before waving us on and we descended back down the mountain once again towards the highway.

Somewhere along the way, oncoming traffic forced us off into the brutally sandy edge of the road and Corey took a spill. I was ahead and didn’t notice, making it all the way to the highway before realizing he wasn’t directly behind me anymore. Christ, what an asshole. He managed to right things himself despite the predicament and is thankfully a forgiving sort. 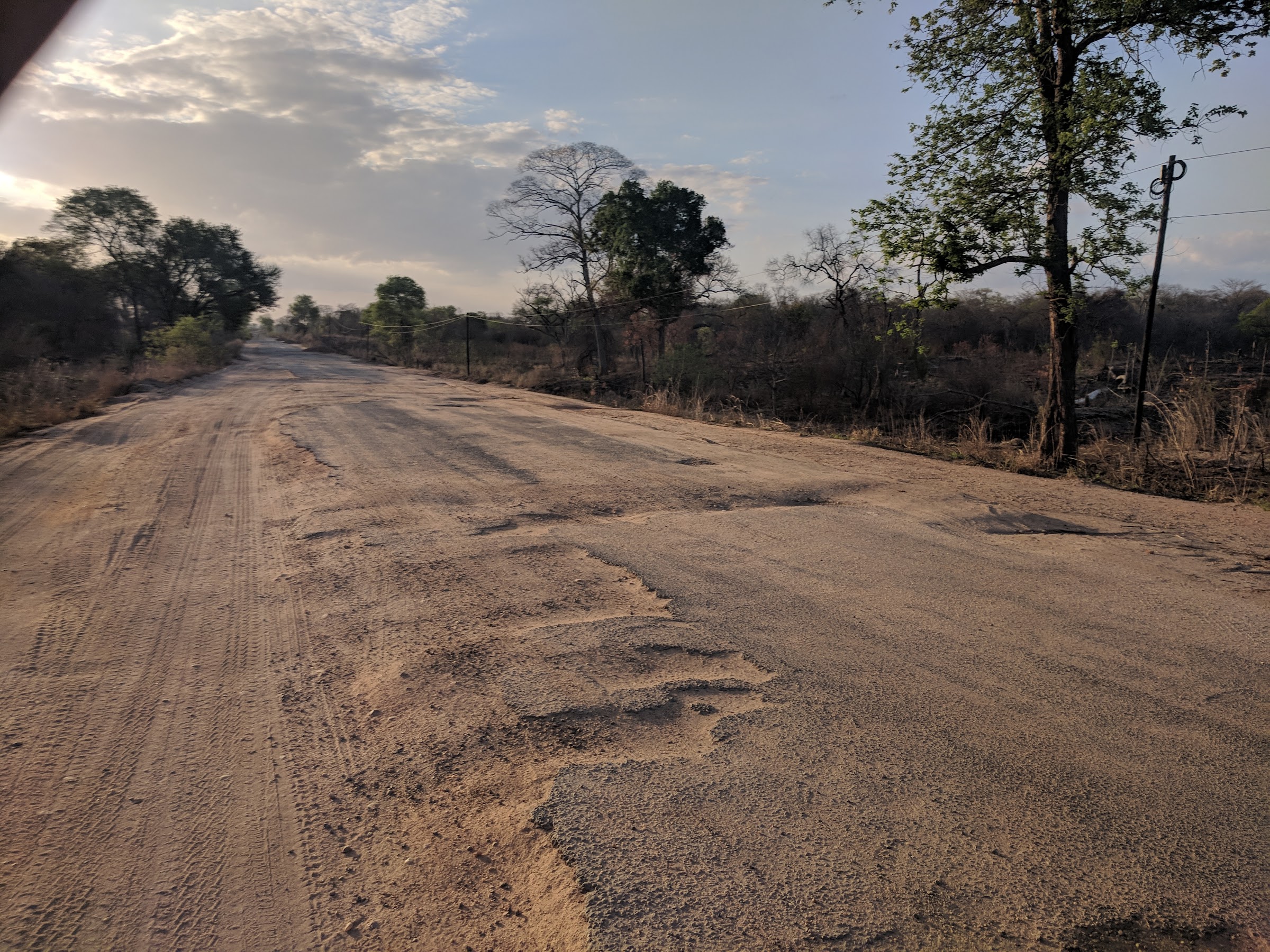 We carried on, setting our sights on Caia, a town perched on the majestic Zambezi river, but the hours of daylight were dwindling down, making the potholes increasingly treacherous. We came across signs for a lodge called M’phingwe Camp prior to Caia and took a km-or-so jaunt off the main road to check it out. We were happy we did.

We came into a mostly-empty rustic set of cabins and structures in the jungle where we were able to get a small hut to ourselves for a reasonable price, plus good food and a bar. We relaxed and chatted with a family of American missionaries who were living out of a giant overland vehicle they’d turned into an RV.

We got a good night sleep and were back on the road by 9am.  Northern Mozambique is pretty sparse, and the next decent-sized town, Nampula, was a long way off (over 700km). We rode single-mindedly and piled on the kilometers on the war-torn roads.

It was clear we’d managed to get off the standard tourist path, as the bundles of people milling about would watch us go by with something that often approached fervor. Some groups would stop what they’re doing, jump up and down arms raised in the air and cheer. Corey asked me at one point if it felt like we’d just won the Dakar rally. It did.

The potholes came to an abrupt and unexplained end, and the scenery continued to become more mountainous. The roads afforded us broad sweeping views of a lush green landscape dappled with sharp, gorgeous mountains that looked like someone had randomly taken a whisk to a bowl of whipped cream dyed green, grey, brown, and red, dragging up impossible peaks from seemingly nowhere. As the sun began to set, the sky exploded in technicolor, the clouds sharply contrasted appearing like a fleet of warships waiting in the sky. We stopped to take some photos, and immediately a small village of locals showed up to gawk. When we invited them to take photos with us, they jumped in, high-fiving, fist-bumping, and flashing us the most genuine smiles imaginable. It was fucking beautiful. 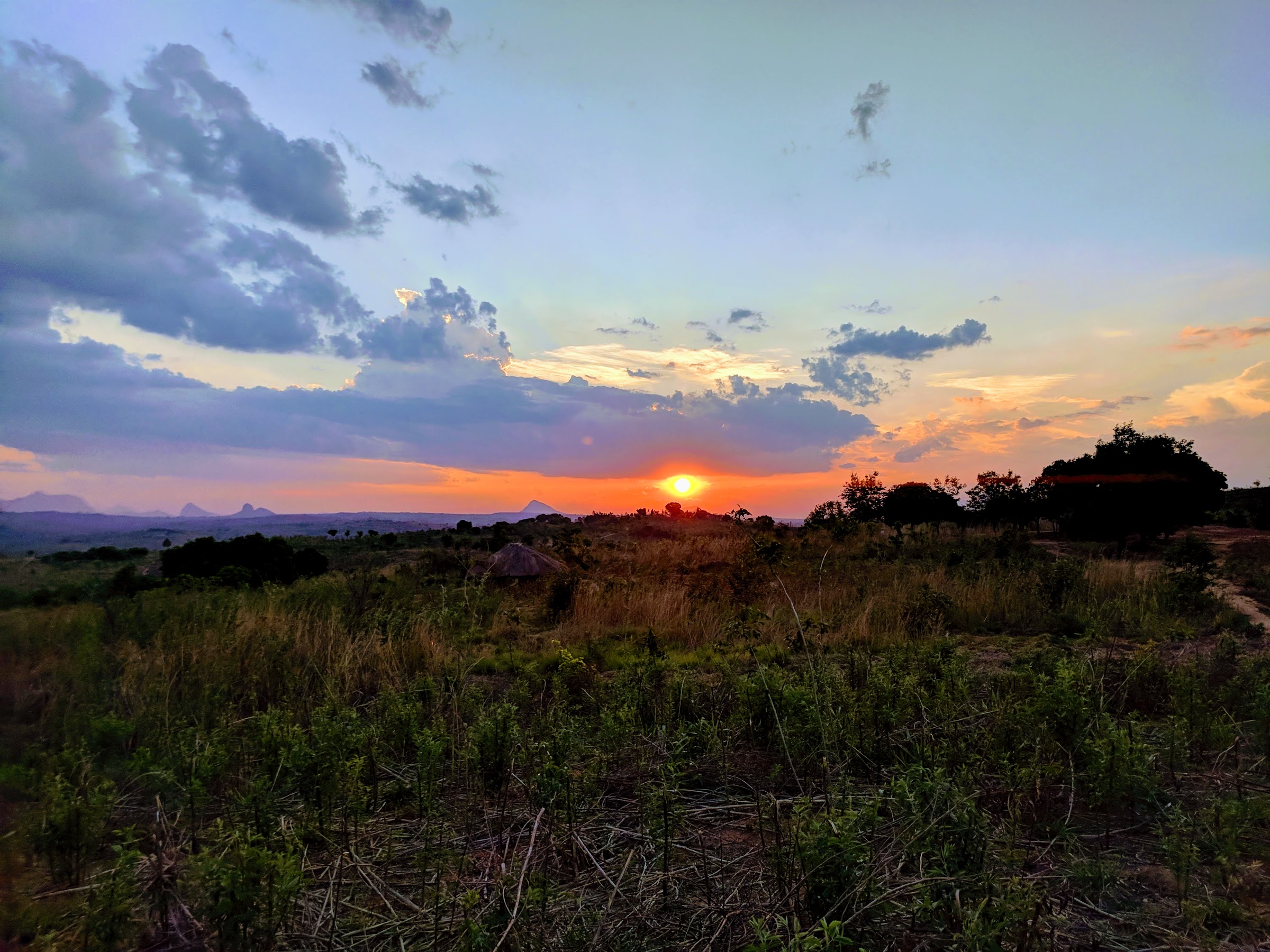 As the sun set, the the active road took on a new character. Wraith-like trees haunted the darkness, with mountains like sentinels watching over us on the horizon. Even in the dark, it was apparent that the landscape was beautiful and dramatic. We crossed numerous small rivers, and the jungle seemed to close in around us, even in the dark. Dozens of fires, small and large, met us at the roadside. In the dark, the fires looked dazzling, especially as we passed swaths where one whole side of the road was flames, the other, murky smoke-filled trees dully flashing in the firelight. Dense clouds of smoke billowing over the roadway added to the frightening adventure.

There were thankfully few potholes, but human and animal traffic abound. At one point, a small pig darted from the left, drawing an arc that continued in my path as I hauled on the breaks, narrowly swerving in the last few inches from hitting the squealing creature. At a police checkpoint at night, the cops that approached us muttered “they’re speaking English” in Portuguese before waving us on. We pressed on to Nampula, a city of over 400k people and the third largest in Mozambique.

The road became a bustling thoroughfare even at night. We stopped for cash at an ATM before heading to a well-known backpacker’s named Ruby. A complicated maneuver granted our stripped bikes entrance over a high curb and small gate and into the lawn by the modest home that would be our shelter for the eve. After checking in and unloading, we also made a reservation at a sister Ruby Backpackers for the following evening in the former colonial capital of Mozambique Island. Then we headed around the corner to a jumping local bar complete with a loud band for some beer and food.

My old Pirelli rear tire was beginning to look awfully long in the tooth, and Nampula was the last large town we’d be passing through for over 1500km (to Dar es Salaam). My mother had also booked a flight to meet me in Dar in about three weeks, and given our intended path, that didn’t leave a lot of wiggle-room for a tire disaster. As such, it seemed prudent to try and source a replacement before heading out. After a good night sleep, I hit the streets solo to try and find one.

A stop at a local service station started me on a pinball path being handed off from local to local that eventually sent me to a small shop selling cheap Chinese tires sizes that worked for me. I bought a tire (and eventually a tube), went back, and brought my bike over to a stretch of sidewalk where a guy had offered to replace the tire for me. Then I headed back to the hostel for lunch with Corey. After breakfast, I came back to my bike very much a work in progress…

I stuck around until the job was done, went back to the hostel to grab Corey and my things, then it was time to hit the road to the Island of Mozambique!