It was a Tuesday morning as I headed out to meet up with the Australian biker Corey, marking what I expected to be my last day biking through South Africa (for at least a very long time) and my first day traveling with a partner. Corey was meeting up with another motorcyclist bloke for breakfast, so I crashed their breakfast party at a local Mugg and Bean. We discussed our plans, and stopped by a local travel agency to get me a DriveMoz sticker (ostensibly, a membership in a Mozambican AAA-like service, but supposedly useful in preventing cops from messing with you there) on the way out of town. We were heading for Swaziland, and the first leg was backtracking to Barberton, SA, where I’d come from. From Barberton, we turned off of the main road and up into the mountains into the Barberton Nature Reserve, and towards Pigg’s Peak border crossing.

The weather was cooperating, which treated us to beautiful views of the mountain-hugging road. We passed a turn-off with some rock displays and plaques, as well as a killer mountain view, so we stopped to look at the display. The plaques along with some women in a car that had stopped as well informed us that we were on the Barberton Makhonjwa Geotrail, a winding mountain path with some of the best views of rocks from the Archaean period, over 3 billion years ago, when the air was full of carbon dioxide, oceans covered nearly everything, there was no vegetation, and volcanoes were belching lava far more than now. Apparently nearly all of the spots where these formations are visible are far-flung, and to highlight it, the route has turnoffs with information and examples distributed along the path. 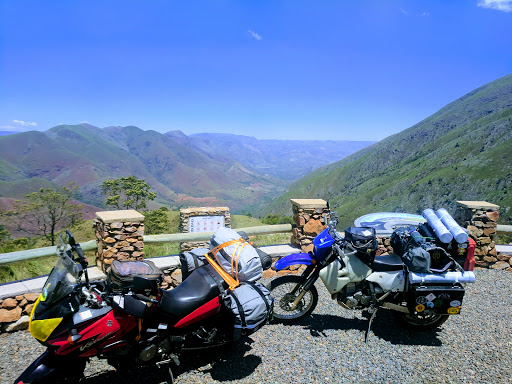 The road was full of twists, turns, and turnoffs. We passed exposed mountain rocks that really did look pretty unique and awesome, with pillowy igneous rocks, sandstone, and even a neat spotty-stone that formed with early small organisms in them, the fossilized remains of some of earth’s oldest life forms. My initial feelings that this was perhaps too geologist-nerdy for me was proved incorrect, especially when coupled by a fun, tranquil mountain highway.

Eventually, a couple small buildings appeared in the distance, marking what may be the most tranquil border crossing to date. Clearing South African customs and immigration took about 10 seconds. There wasn’t a soul in sight. The 30 feet over to the Swazi side went like a breeze until the border guard insisted we fill out customer satisfaction surveys, being really pushy and not liking when I responded by filling it out quickly and putting “less surveys” in the “comments” section. I didn’t mention the condoms they, of course, had.

On the Swaziland side, we were dumped onto a bumpy dirt mountain road surrounded by forest. It was a blast. Corey and I took turns trying (to moderate success) to document each other’s rides through the twisty, occasionally muddy, but super fun roads. There was nearly no traffic. The sky had cleared up. The road was fun, as was having a motorcycling partner for the first time. It was a great day. We made it to Pigg’s Peak, a tiny little town, and made a turnoff from the main road onto another scenic tar road. 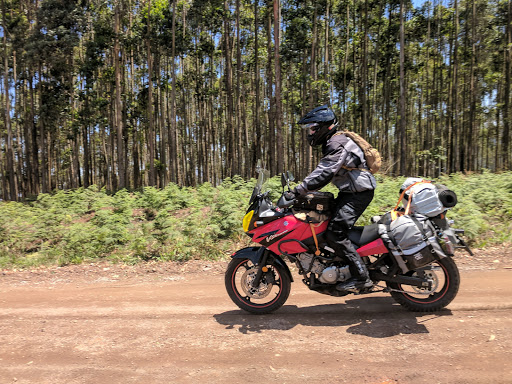 We stopped for lunch at a small intersection and had a lunch of $1 roadside rotisserie chicken. It was delicious. The road took us up through a mountain pass overlooking the Maguga reservoir and dam.  The sun was high and hot. We stopped at an overlook for some more ice cold Sibebe beers.

My plan was to head to Ding’s office before she left for the day and crash with her if it worked out (my phone didn’t work in Swaziland, so I had no way to confirm with her, or see if she had room for Corey as well, but we figured we’d give it a shot. We’d also heard it was cheaper to get a Mozambican visa at the consulate in Mbabane, so we headed there first.

We caught up to the main road not far from Mbabane, and unlike my last trip through, the clear skies provided an unobstructed view of the city. Situated in the mountains, small buildings sprawled over the lumpy landscape, with not much high-rise or industry to identify the downtown. The Mozambican consulate was accessible only by dirt road, and was sadly closed to consular business for the day despite it being early afternoon. The guard gave us the required materials sheet, and told us we’d only save a little money by getting the visa there vs the border, and that it would take three additional days. We worked out it made more sense to just continue on and get it at the border, and headed to Manzini to try and catch Ding.

We rode down the main highway and into the paint factory at about 3pm, catching Ding and her sister moments before they headed out for the day. She said she’d forgotten I was coming that day (oops!), but in fact had bunk beds in her spare apartment for us! We followed the sisters to the local grocery store to pick up food for the night and then went back to their house.

The sisters lived in opposing homes on the same plot of land, and Ding had a small in-law unit in the back of hers. It was a cute spot, complete with homespun rainwater collection, and our hosts were incredibly generous and friendly. They cooked up several big meals at once, making one with chicken for us, a salad for them, and a big bowl of protein for Ding’s son, who swung by after the gym just to pick up food his mom had made. Adorable.

We drank beer and whiskey, we watched the King’s plane take off from a nearby airport, and we chatted through the evening about all manner of funny topics before stumbling content back to bed. In the morning, we bid farewell to the sisters and packed our things. It was an easy ride to the border on the main highway, but we weren’t in a rush to get out, so we planned a route that would take us up north, and potentially through the Mlawula Nature Reserve (if they’d let us in), and through Hlane National Park if they wouldn’t. After a quick stop for Corey to try and source some convertible hiking pants at the local market (which he succeeded at), we jumped on the main highway for a hot second and headed north.

Things were super green and pleasant, but most of the day didn’t take us through the grandiose mountains we’d seen in the west. We stopped for a tasty lunch at the Mananga Golf Club around the apex of our route and managed to snag a little bit of internet to look for where we wanted to ultimately stay the night. Ultimately, we settled on the Mabuda Farm, an easy drive from us and the border. We settled up and headed out to try our luck crossing the Mlawula Nature Reserve.

We made it to the entrance of the reserve and from the gate could see a badass gravel road twisting off into the dense jungle. It looked fantastic… but the lady at the desk told us no bikes were allowed. Corey had interviewed for the position of Director of National Parks for Swaziland, and tried his luck sweet-talking us in, but it was to no avail, despite the lack of the “Big Five” animals that normally preclude motorcyclists. C’est la vie.

We rode down the road and through Hlane National Park, which actually *does* have “Big Five” animals (I really only saw a giraffe and some large birds from the road), and over to the town of Sitake. A 1km dirt road outside of town took us to the Mabuda Guest Farm, where we decided to camp at a beautiful site overlooking mountains, a valley, and coffee and banana plants. It was still plenty early, so we settled on heading to town for supplies and braaing for dinner. I rarely would set out to do something like this by myself. It was great to have company and a fellow cook to make it worthwhile.

We snagged steaks and sausage, onions, cucumber, olives, peppers, and homegrown tomatoes. We cooked up a feast and I slept like a baby.

The morning brought a thick layer of dew, which gave ample time to start the day while waiting for things to dry. From the farm, it was a short uneventful drive to the Goba Border, where it was time to switch languages (portuguese!), switch currencies (metical), switch directions (so much north!), and switch scenery (sand and beaches!).

This site uses Akismet to reduce spam. Learn how your comment data is processed.